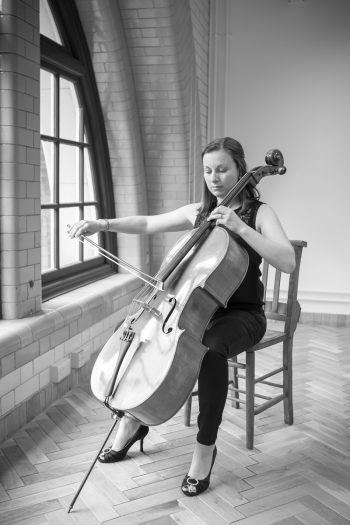 Sarah is a graduate of the Royal College of Music where she studied with Melissa Phelps. During her time at the RCM Sarah was principal cellist of the RCM Sinfonietta, the Symphony Orchestra and the String Ensemble with whom she performed the Tchaikovsky’s ‘Souvenir de Florence’ alongside Gordan Nicolich (leader of the London Symphony Orchestra). Sarah also studied in Turin with Liza Wilson and attended the Post-Graduate School of Music in Saluzzo.

Sarah began studying the ‘cello aged 8 at the Minster School, Southwell, where she won numerous prizes. In 1994 Sarah joined the Nottingham Youth Orchestra and became principal cellist in 1997. In 1998, Sarah performed the Saint-Saens Cello Concerto with the NYO in Hungary and Austria and was invited back in 2001 to play the Dohnanyi Concerto in Southwell Minster. Sarah has also performed the Haydn Cello Concerto No 1 with the Southwell Minster Chamber Orchestra on several occasions.

Sarah has appeared in concert and on television many times alongside artists such as Will Young, Rod Stewart, Shakira, Lee Ryan and Il Divo. Her TV appearances include Top of the Pops, Graham Norton, Richard and Judy, MTV and E4. In concert she has performed at the Royal Albert Hall, Hackney Empire and Wembley Arena.

In 2007 Sarah was principal cellist in the ‘Celebration of Cellos’ concert in Southwell Minster performing Bruch’s Kol Nidrei and the Vivaldi Double Concerto.

Sarah lives in Southwell near Nottingham and is the coordinator of “Highly Strung” . She is also a ‘cello and piano teacher, a chamber music coach. Many of her students have gained scholarships to England’s top independent schools including the Purcell School, the Nottingham High School, Trent College and Eton College. Sarah also has former students that have gone on to the Royal College of Music and the Royal Academy of Music and was the teacher of BBC Young Musician (2016) winner Sheku Kanneh-Mason, whom she taught up to grade 8. She has a 100% exam pass rate, 98% of which are merits and distinctions.

Sarah is very much in demand as an orchestral, chamber and session cellist and also as a cello teacher – for more info please visit www.sarahhuson.com